Share All sharing options for: Thursday: Links with self-confidence 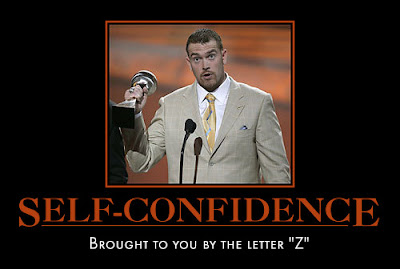 Get rid of the redshirt [ESPN.com]


Big XII commissioner Dan Beebe has proposed a plan to give all college football players five years of eligibility by getting rid of the redshirt. Too little, too late for Marty Tadman, we're afraid.

Beebe said that college football differs than other sports because of the widespread practice of redshirting freshmen.

"The thought would be why we would give them an extra year in that sport," Beebe said. "But you're talking about a sport with more redshirts than any other sport. And it's a sport where youngsters play a physical, very tough game with a lot of hard practices."

We couldn't agree more with this proposal. The only question is what would the fifth year of eligibility be called? Freshman, sophomore, junior, senior...gentleperson? Re-senior? Esquire? Hopefully, Beebe has an answer.

Respect for the hook-and-ladder [ESPN.com]
The top coaching decision in BCS history is Circus. No. 3 is Statue Left.

Chris Petersen cracked the Top 10 defining BCS coaches [ESPN.com]
We are also ecstatic that June Jones did not make the list.

Ian Johnson: captain of longevity [Dave's blog]
Yes, it does feel like Johnson's been around forever.