Share All sharing options for: Thursday: Links with nepotism 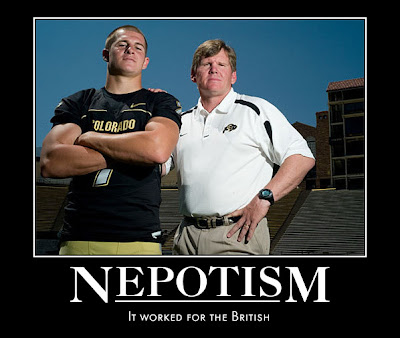 
Former BSU coach (and current OBNUG Public Enemy #1) Dan Hawkins was back to his old Zen-like ways during a speech in Denver on Wednesday, but amidst a shower of metaphors, similes, idioms, and analogies, he dropped this burden on the CU football program:

"Our goal is to win a national championship at Colorado," Hawkins said, veering into his booster speech. "They laugh at that now, but you won't be laughing because we'll do it, at some point. I promise you that."

We'll believe it when we see it.

The best part of Hawkins speech, however, was not the blathering prediction. Great expectations were only a lead-in to a bevy of classic Hawkinisms. Enjoy.

"It takes all the people in this room, that we all support each other in this thing. As Nelson Mandela says, it's about ubuntu, that we're all in this together."

"We have a saying: There's two types of class, there's first and there's no

"I always tell our guys that excellence is doing a common thing in an uncommon way, and I didn't make that up."

He ended the speech with, "Go play intramurals, brother."


Akey responds to NCAA sanctions [Idaho Statesman]
His response: "We have to worry about academics, too?! We haven't even figured out this football thing yet!"

Will Boise State crash the BCS again? [Red Zone Report]
More importantly, are you really crashing the BCS if you're invited?