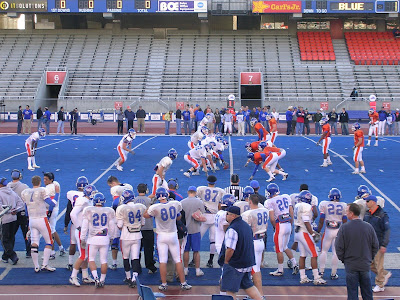 The Boise State offense got back on track tonight in the Blue-Orange game. Freshman QB Kellen Moore had another fine performance, leading several long drives, and Doug Martin scored the only touchdown of the evening on a short TD run.

We were very pleased with how the Broncos looked. The defense showed some good signs, basically shutting down the running game. All four QBs made one or two good plays when they had their chance. And we even finagled our way into the scrimmage without paying.

Here are some of our first impressions: