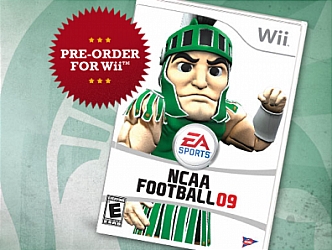 Buster Bronco lost in his bid to become the cover mascot for NCAA Football 09 for the Wii, losing out to Michigan State's Sparty Spartan and his giant fake eyebrows. Keep your kids away from the box art! That's a nightmare waiting to happen.